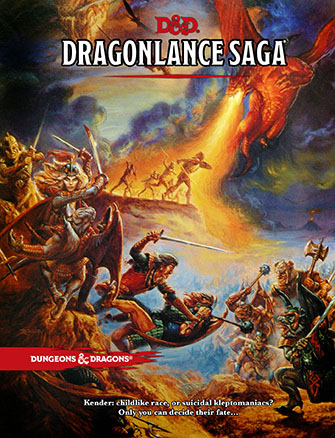 The next big campaign setting for Dungeons & Dragons Fifth Edition has been announced, and it's a big one. Wizards are bringing the Dragonlance Saga back to the stage! This was hinted at last year in an interview with World-builder Chris Perkins on Den of Geek when he said "We’ll visit Krynn again when the stars align and we have the perfect Dragonlance story to tell."[1]

From the way the report and leaked images read, it will contain a storyline that, instead of railroading players through the classic stories, will allow them to play through a sandboxed world alongside the overall timeline. It seems like an interesting concept that the players would encounter a different aspect of the story depending on their current place in the timeline when arriving at a location. The use of a gamebook like keyword system[2] will help to tie together the branching plot.

There's a free Dragonlance Player's Companion available for download[3] on their site which contains a new Kender race, and pre-gen Barbarian and Gnome builds (although the latter looks much like the Deep Gnome from Elemental Evil). It also contains a recipe for "Qualinesti Waybread" from the Inn of the Last Home!

In addition to the RPG supplement, Wizards will be releasing a new D&D Adventure System board game which we'll be able to combine with others in the series[4]. Dates for the release of this are TBA at this stage.

All up it seems to fit the agenda of Fifth Edition. A dash of nostalgia, a heavy squeeze of fresh dragon, and an increasing emphasis on story over combat.

Thanks for playing along with our 2015 April Fool's joke. Very sad to say that there's not really any news about WotC bringing back Dragonlance any time soon… however much we wish they would.