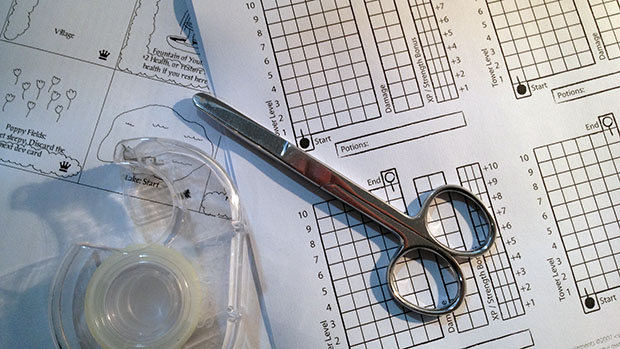 If you're just geting involved in the hobby, a good way to test the waters is to try Print and Play games. There are hundreds of them available on the web. Here's a quick list to get you started.

All of the descriptions below are from the boardgamegeek.com (BGG) pages for the games. Have a browse around while you're there. Each game page has a section for files where you'll find most of what you need to download. You'll need to sign up for a free account in order to download any files – don't worry, it's quick and spamless.

Jasper and Zot is a one player game about two old, feuding wizards. The White Mage Jasper is quite the famous gardener and his pumpkins always win the blue ribbon at the local faire. His long-time adversary and neighbor, Zot the Necromancer, who is not good at growing living things, has summoned an army of the undead to smash all of Jasper's prize-winning pumpkins. Help Jasper defend his pumpkins by turning Zot's shambling minions into delicate white flowers and then burning them to ash!

It's up to you and your ladybug helper to rid your beautiful flower of those pesky aphids.

In this rummy variant, created for younger players and families, players collect different sets of coloured ladybugs. For each set laid, your ladybug is moved to a leaf. All aphids that are on that leaf become ladybug lunch and can be removed from your flower. The first player to rid their flower from all the aphids is the winner!

Fairy Tale in My Pocket

Today is the big day! The prince has found his true love and will marry her when the sun sets. Everybody in the kingdom is rejoicing. Well, everybody, that is, except for you.

You, a simple peasant, have just received a most unexpected visitor: the princess' fairy godmother! She has warned you that all is not as it seems. The woman that Prince Micah is about to marry is not his one and only Princess Abigail, but is really an impostor who hopes to take over the kingdom for her own evil plans! She has placed an enchantment over the real princess, who now lies fast asleep in a cottage deep in the forest.

The fairy godmother has explained to you that the only way to save the kingdom from a terrible fate is to awaken the princess with a rose and get her back to the castle in time to stop the wedding. Many dangers await, but the fairy godmother is willing to help you out on your perilous quest...for a small price (hey, even fairy godmothers need to eat!).

Will you save the kingdom and live happily ever after? There's no time to lose if you wish to succeed. The sun is already beginning to set…

Note: the files section for this game also has a b/w line art version so you can colour in your own copy.

Fox and Crow in: Yay Pancakes!

Fox and crow wander the world, escaping dangerous situations and dicovering amazing treasures. And eating pancakes. They always have time for pancakes.

Yay Pancakes is a Print and Play bluffing game.

Players take turns laying down cards that tell part of Fox and Crow's story in a somewhat logical order. If a someone plays a "Yay Pancakes" card, they collect all the cards on the table.

When no-one else can play, whoever has the most points wins.

Solo Tower Hack is a solitaire dungeon crawl game. In it you are ascending a tower filled with assorted nasties, trying to reach the Big Bad Evil Guy (BBEG) at the top.

The game is played on a 10 x 6 square grid and is available as a free print and play game. All you need are the PDF rules, a pencil and two six sided dice (2D6).

Elves & Shelves is a free, print-and-play auction game for 2 to 4 players. Thematically it follows on from Warehouse Elves, with which it shares some components.

The toys have been brought in from the warehouse and placed on the sorting shelves. Your job as the sorting elves is to collect them according to the children's Wishlists.

The game is played over 3 rounds of single-card blind bidding (tied bids cancel out). At the end of each round, scoring takes place. The player with the highest score after the third round is the winner.